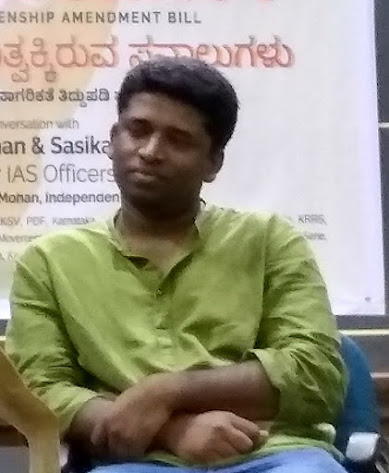 To be silent is to be ‘anti-national’, believes Kannan Gopinathan, ex-IAS officer-turned-social activist, who has travelled across the country to 60-65 districts (~10% of the country) spread over 18 states, meeting thousands of people from different backgrounds and perspectives, observing agreements and disagreements in different parts of the country. During a conversation with me, he observed how different people think differently within the bounds of their own rationality framework.
For instance, even people willing to vote for a certain caste have some underlying reason to do that. In India, different castes are concentrated in some geographic regions. Therefore, when many people vote for their caste, they want a minister coming from their locality who will look to lead the progress of the area.
Further, he observed that across the country, we fear police officials while we should be feeling safe to see them. The reason is that the government treats the people as the subject, not as citizens. To be called citizens, we should be able to ask questions to the government we have elected, but the same has become difficult over the last few years. Police officials feel that they have the license to officially beat up the citizens, while the same should be considered as assault.
The government has tried to take the path of treating the people of the country as passive beneficiaries rather than active citizens. Questions on the incapability of the government on a particular matter are replied by them by giving an additional subsidy. However, it is important to understand the passiveness associated with such benefits, where we are not expected to actively question and involve in the decision-making process of the government.
The government has been bullying the country’s citizens by depriving them of their right to ask questions. It is important to understand that we are a country that does not run-on macro innovations but thousands of micro innovations. For instance, the government’s announcement of demonetization was a macro-innovation. However, the same was followed by thousands of micro-innovations as people came up with different ways to outsmart the government.
All of the parties involved are trying to outsmart each other instead of doing their jobs honestly. The problem with bullying is that the moment you stop people from expressing their opinions, you are dumbing down on the entire country and will settle on sub-optimal solutions.
Despite the massive failure that demonetization was, there is no single article that clearly reveals what the government did wrong there. Some sources speculate that the final money deposit in the system was even higher than what it was pre-demonetization because of the deposit of fake currency notes. However, the implications of these events have not been clearly documented.

Raising concern and documenting the true situation is important in such cases to avoid such mistakes from repeating in the future. We had a demonetization in 1970, yet the same happened again in 2016. The same mistake has been repeated now by not letting people bring out as to what went wrong.
A thought that often crosses our mind as to what can we, as the ordinary educated population of the country, do? What actions can we undertake to actually bring a difference? Well, the truth is that the impact that we can bring is beyond ordinary.
For starters, more of us can think to enter politics. The country needs more politicians right now, and we need more educated and well-intended people to enter politics and work towards bringing a change. We often complain about the lack of alternatives available to us while voting, but at the same time, we are not willing to enter politics.
It is crucial to understand here that not all the parties in the system are important. It is just a game of adjusting their motives and drivers to contribute to the change you want to bring. It is crucial to align the incentives of the involved parties in a similar way that we talk about aligning the incentives of an agent with the principal.
Secondly, It is important for us to disagree and express our opinions while having day-to-day conversations. We often come across opinions that we might not agree to, yet we avoid saying anything just to prevent those unpleasant conversations.

Also, a large part of the population finds it difficult to listen to people with conflicting views and try to do away with it by name-calling that set of people. It is important to understand that ignoring a set of opinions by ‘name-calling’ is not in the right spirits of how a democracy should function. Further, a lot of us keep referring back to past events and incidents while discussing current issues.
Expressions like ‘Where were you in…?’ ate used to justify and cover up current mistakes. When not fully informed on the issue, we get angry when we don’t have answers instead of accepting the same and informing ourselves fully on the subject. We should remember that we are the land of ‘Tark Shastra’, and we should actively debate on issues with an expression of our opinions.
Lastly, we should raise our concerns when we feel something happening around us is wrong. We should use whatever way we can to raise our voices, but it is important to do it. Because you are effectively aggreging to something happening around in case you are not raising your voice. ‘To be silent is to be anti-national.’
We are very less informed on what China is doing as nation. Gopinathan learned mandarin in the last one year. Therefore, he created a website called whatchinareads.com. The programme in the website runs across 100+ Chinese media websites and converts the key reported news into English so that we can read and understand what Chinese media is reporting in real-time.
—
*Indian Institute of Management (IIM), Ahmedabad. second-year MBA student. Based on an interaction with Kannan Gopinathan, IAS officer-turned social activist