IN A bid to better understand its dogs, Irish Guide Dogs is harnessing new technology to tune into their world.

Last year, the organisation trained a medical alert dog for a visually impaired person with diabetes.

“He was trained to alert her when her blood sugar dropped to a certain level and she was then prompted to take her insulin,” says David McCarthy, client engagement and services manager with Irish Guide Dogs for the Blind (IGDB).

The experience got McCarthy thinking: “Are there things happening with the dogs that we can’t see? And is there a way to read that information?”

Now new technology is set to explore the mysteries of the dog’s mind.

A lot is expected of a guide dog. Whether they’re guiding a visually impaired person or working as an assistance dog with someone who has autism, they operate in tense situations and have to be able to manage complex scenarios. 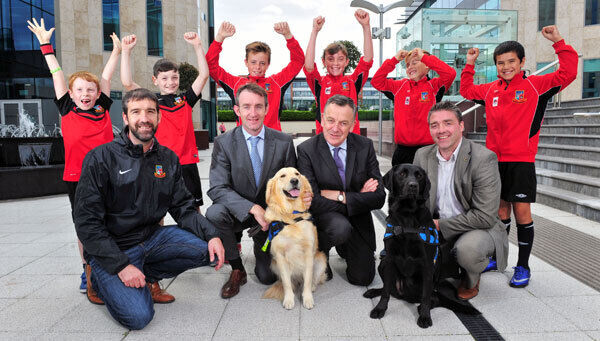 The launch of the LoughMahon Corporate Challenge took place this week in Mahon.

McCarthy gives examples: “They may need to override their owner’s wishes. If a visually impaired person commands a dog to step off the kerb into traffic, the dog has to communicate ‘no, it’s not safe’.

“Or if the dog’s with a child with autism — who wants to hug and hold it a lot and even pinch it — that amount of physical interaction can be tough for a dog. If a child hits itself or the dog, the dog needs to be able to extricate itself but not carry the stress forward.”

As a consequence, during training, IGDB handlers are constantly testing and assessing a dog’s ability to handle and recover from stress. And this stress may well be evident in the dog’s visible body language — but not always.

Which is where a new collaborative research project comes in.

The partnership is between IGDB, Tyndall National Institute, Cork, and leading research groups in Wales.

The Tyndall has worked with many leading medtech companies to develop breakthrough technology for healthcare.

Its head of ICT for health programmes, Paul Galvin, has been talking with David McCarthy about the potential to translate some of the technologies developed for human application into use for training and communicating with IGDB dogs. 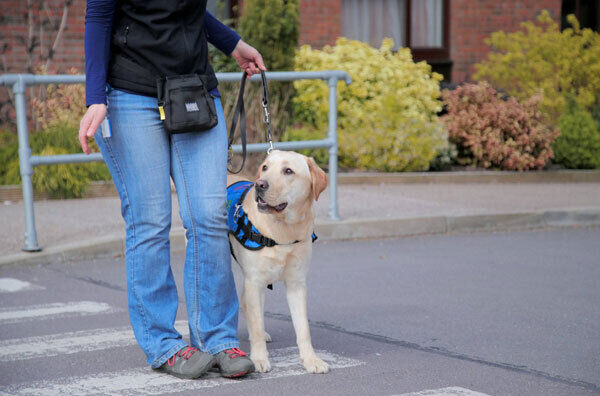 Rocky with an IGDB trainer.

“Using a range of sensors — for detecting parameters such as motion, temperature, respiration, and ECG — that [hopefully] can be deployed onto the dog’s harness or collar, will allow us to get a better understanding of the dog’s health and welfare.

“It’ll help us understand any event or circumstance that might cause them stress,” says Galvin.

IGDB trainers are always reading the animal’s visual cues — the carriage of its head and tail, as well as its varied body language — for visible signs of stress. But these signs can be ambiguous.

“Panting could throw things off, for example,” says McCarthy.

“Is it a sign of stress or is it just stuff a dog does, just the natural way the dog is? A dog could be in a stressful situation and be panting after it for a while. Some trainers would see this as a sign of stress, but the dog mightn’t be stressed at all.

“We don’t know how much impact the stress is having or how quickly the dog is recovering — the hope is that the sensors will support our decision-making,” says McCarthy. 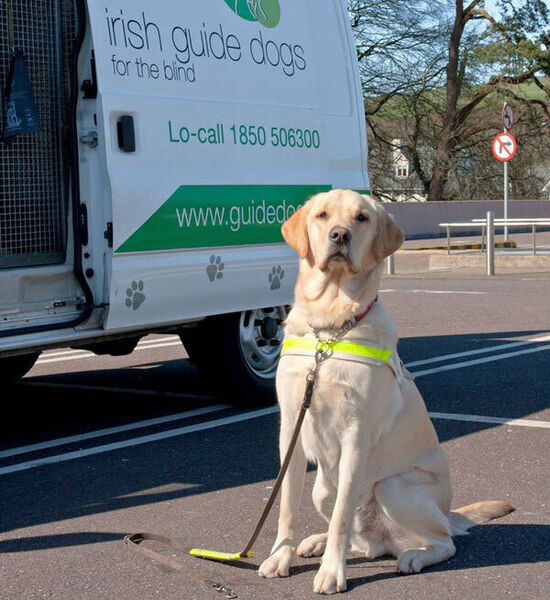 The innovative technology promises far-reaching benefits to IGDB and its clients. And it makes sound economic sense.

Every partnership created with a working dog — from breeding right through to training with the client — costs €38,000.

So being able to read when a stress reaction happens in a dog, being able to identify whether it’s sustained or dissipates quickly, can make the difference to whether a dog stays or leaves the training programme.

“If the sensors detect that five to seven minutes after a stressful event, the dog still has signs of stress, this would be a red flag for us from a training perspective — the stress hasn’t gone, so the dog’s distracted, not concentrating and therefore not safe for the client,” says McCarthy. But once a stress trigger is identified, the dog can be helped.

“We can work on it with the dog. If we see an improvement, it means we save that dog — it continues its training.”

The hope, says McCarthy, is that the sensors will pick up a variety of data from the dogs, without the animal even being aware that it’s being read. “And then we’ll be able to use software to tell us the story.” 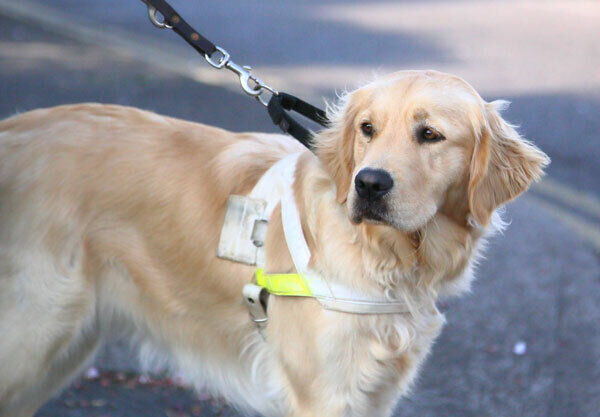 A happy dog is key to the success of the IGDB programme.

“Our dogs need to take on a significant level of responsibility. They don’t have to be ecstatic about it, but they need a level of comfort with it that will allow them to do it over the eight-year period that we hope a dog will work for us.”

Galvin points out that dogs can often detect things beyond human awareness and says the technology can be used to help us know what the animal knows.

“[Such technology] could provide the basis for early alerts to the carers about potentially adverse events — for example, assistance dogs for autism can detect when a person’s about to experience challenging behaviour. It could also provide feedback on the health and wellbeing of the dogs during the re-homing process.”

Galvin hopes the project will start within the next month. The challenge is where on the dog to put the tiny devices that will be worn during training routines in the open environment.

“Where can they go on the dog to make sure they won’t interfere with its normal behaviour or make it feel uncomfortable?”

McCarthy has no doubt this challenge will be met.

“The beauty of working with Tyndall is that their business is nanotechnology, making things smaller. We’re hoping they develop a sensor that will sit inside the dog’s collar, allowing us a constant opportunity to develop and collate data from the dogs.”

“We’re hoping to see an increase on that this year — to be well into the 60
s,” says McCarthy, adding that the technology’s biggest impact will be increasing the number of dog and client partnerships.

“The technology will mean we’re not losing dogs in training that could have gone on to be good dogs and that the dogs we put through are the best.

“It will improve waiting times for clients by increasing the numbers of dogs going through training.”

Every dog is important to us 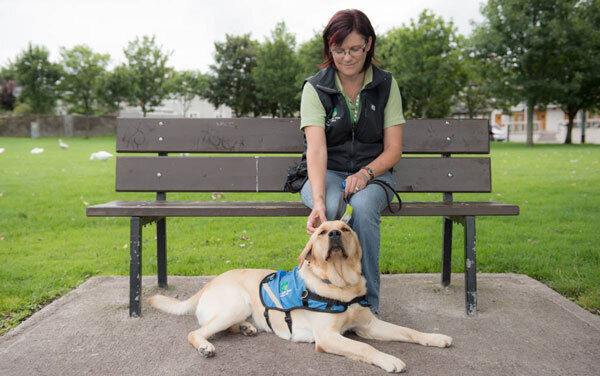 Olive O’Sullivan is dog supply manager with the Irish Guide Dogs for the Blind.

Emmy’s a yellow labrador retriever. She’s calm with a settled temperament and no health concerns.

IGDB dogs supply manager Olive O’Sullivan sourced her last year from Guiding Dogs for the Blind in the US.

“She was sent over on loan and she had her puppies here. She was a wonderful mum to her litter of seven pups, Lion, Leon, Larry, Lulu, Lady, Leya and Lottie.”

O’Sullivan wanted Emmy because of the 16 pups (representing two litters) she’d had before coming to Ireland, 13 became guide dogs.

“That’s why we wanted her line to come into our breeding programme. Emmy’s puppies are potential breeding dogs. I’ll pick the best male [stud] and the best female [brood] for breeding.”

This is O’Sullivan’s job — to develop a self-sufficient, sustainable dog supply for IGDB programmes.

The work has two aspects — where there are gaps in pup numbers born, O’Sullivan seeks available pups from other guide dog schools.

Her second responsibility is to continue getting diversity into IGDB breeding programmes by sourcing new lines from other breeding schools.

IGDB is a member of the International Guide Dog Federation (IGDF) and also part of the European Breeders’ Network. This enables O’Sullivan to look for stud lines from these organisations’ schools.

“We do it through frozen semen or we get one of their stud dogs sent over — this allows us bring in our genetic diversity, as well as replace dogs we’ve retired.”