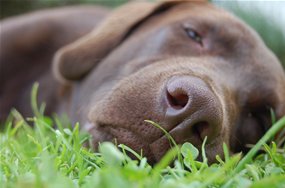 That blank stare in your dog’s eyes could be the result of thousands of years of human intervention (Source: Superburg/iStockphoto)

Dogs are now so dependent upon people that they fail certain basic intelligence tests that wolves and wild dogs ace, according to new research.

The findings provide evidence that humans, through domestication of canines, have caused dogs to lose their non-social problem-solving skills. The loss in skills appears to be genetically ‘hardwired’ into dogs, explaining why homeless dogs struggle to survive.

“Often feral dogs survive by taking advantage of human leftovers or domestic livestock,” says lead author Bradley Smith, adding that the ‘leftovers’ could be things like garbage scrounged from dumps or the occasional food handouts.

“It would take a lot of generations of successful dogs to start fostering any such cognitive abilities required for survival in the wild,” says Smith, a researcher in the School of Psychology at the University of South Australia.

For the study, accepted for publication in the journal Animal Behavior, he and colleague Carla Litchfield put domesticated dogs and dingoes through a problem-solving test known as “the detour task.”

Dingoes are also domesticated dogs, but through many generations, they have adapted to life in the Australian outback. As a result, dingoes have evolved more ‘wild’ features and instincts that distinguish them from other dogs.

The detour task assesses spatial problem-solving abilities because it requires the animal subjects to travel around a transparent barrier to obtain a reward, which in this case was a bowl of food. The barrier here was a V-shaped fence with detour doors that either swung inward or outward.

The food bowl was placed inside or just outside the intersection point of the ‘V’ barrier, while each subject on the opposing side of the barrier. The test runs were all conducted at the Dingo Discovery Centre in Victoria, Australia.

All of the dingoes found the food reward in about 20 seconds, taking proper advantage of the detour doors whenever possible. Domesticated dogs, on the other hand, looked puzzled and confused. They pawed at the fence, dug at it, and even barked, likely out of frustration and to call for help.

Prior research determined that wolves, like dingoes, ace this test.

“Wolves will outperform dogs on any problem-solving tasks that are non-social,” says Smith. “Dogs are great at social tasks – communicating with humans, using humans as tools, learning from humans via observation – whereas wolves are much better at general problem solving.”

He says few cognitive studies have been performed on wolves and other wild canids, but the handful that have been done suggest wolves are better than domesticated dogs at working independently and at using tools, such as ropes.

Rob Appleby, a researcher at Griffith University in Brisbane, says he agrees with the conclusions and found the latest evidence to be “compelling”.

“(The new study) suggests that there may be cognitive differences between wild and domestic canids in terms of how each might approach solving such a problem,” he says, “potentially relating to their differing evolutionary histories.”

Use these social-bookmarking links to share Dogs dumbed down by domestication.

Use this form to email ‘Dogs dumbed down by domestication’ to someone you know: