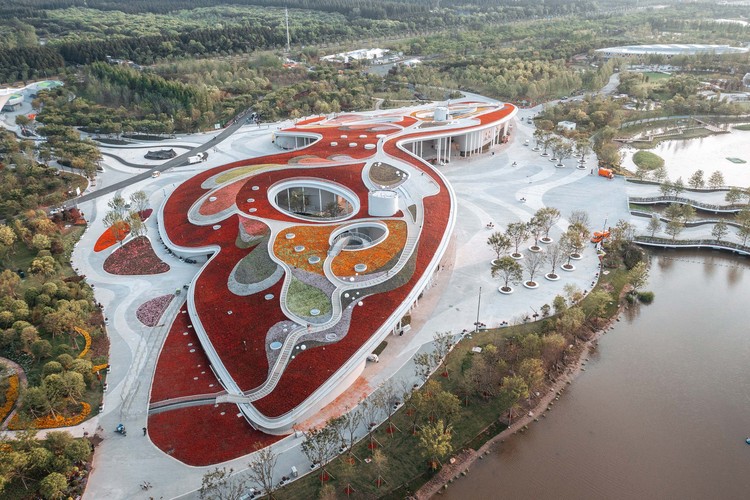 Text description provided by the architects. The 10th China Flower Expo is held in Chongming, Shanghai on May 21st, 2021, Century Pavilion, which is one of the main venues, is themed at “Butterfly and Flower”. As an earth-sheltered landscape architecture spanning over 280 meters, Century Pavilion created the biggest free boundary continuous arch concrete shell all over the nation, and also realized the idea of the ecological expo with the fully utilizing climatic resources，to celebrate this flourishing and harmonious age.

Ecological and Sustainable Rare Botanic Garden. Positioned in a rare botanic exhibition hall, the 12348㎡Century pavilion consists of two parts: multi-media showroom in eastern wing and plants showroom in the western wing, with a silk bridge hanging across the main axis connecting them. To avoid dramatic energy consumption, the mild climate of transition season is fully utilized in an open façade system to increase cross ventilation and natural lighting, and this passive energy-saving strategy decreased equipment system load. In addition, showrooms are built into replaceable units which are detached from the main structure, ensuring maximum compatibility in future renovation. Century Pavilion has fulfilled the requirements of the WELL BUILDING STANDARD at the GOLD level, and three-star green building certification design label.

Butterfly and Flower. Implicating transmutation, the form of Century Pavilion is abstracted from Luehdorfia chinensis, which is a Chinese national treasure. The sloped roof creates a solid wall of flowers that contrasts with the open north façade. The concise curvature benefits the rationality of form as well as space, presenting the posture of flying

Structure Orientated Design. The structure is an enormous challenge. A concrete shell is introduced to minimize structural depth and developed into a pioneering “Prestressed Balanced Concrete Thin Shell with Free Boundary” system. The shell spanning over 280 meters is supported by forestry leaning columns and developed from a single arch into a continuous arch to adapt to Butterfly’s free form boundary, thus minimizes the thickness of the concrete shell to 250mm. This arch height, reaching 1.6meter, is buried in the soil of an earth-sheltered roof ensuring a pure and intact space beneath the shell. The 3 levels 1080°spiral stair supported by single column weights 80tons, its 10 meters cantilever challenges the limit of structure.

Purifying Space. To ensure the purity of curvature spaces, pipelines are concealed in an underground mezzanine which develops from structure foundation counteracting arch thrust. Equipment is attached to each showroom to avoid air channels, and to ensure a clear fifth elevation with flowers. The sunlight directed to the dark interior via light guides enhances the atmosphere of the cave-like space, and the contrast between the calm interior and colorful exterior emphasized the performance of the space. The pure curvature space is resulted from the cooperation of all professions, making the butterfly special and unique.

Construction. To realize a low-cost as-cast-finish concrete, prefabricated forms are replaced by a tip positioning system. More than 30 thousand pipes are erected in a 800mm*800mm grid to locate the coordinates of the shell’s lower surface. To stabilize plants on the sloped roof, the planting layer is divided into 2m*2m blocks to plant flowers separately, and is thus convenient for replacing.

“Butterfly” is not only a prominent characteristic in appearance, but also a critical factor in solving contradictions. The earth-sheltered landscape shell deriving from the very nature of architecture is finally realized as a blooming roof garden, and the design practice turned into a restriction-breaking “metamorphose” process.